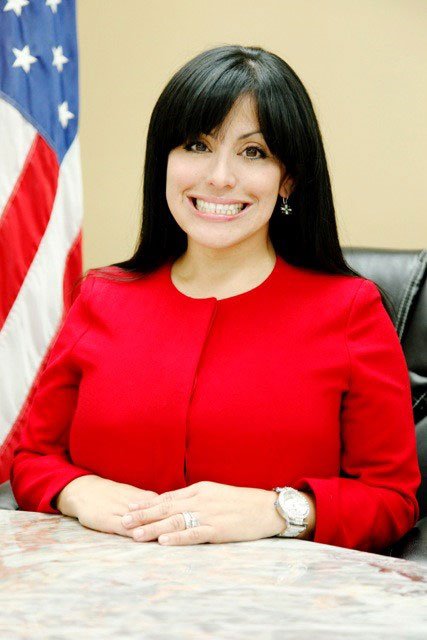 Mayor Claudia V. Cubillos was the first Hispanic female elected in the Village of El Portal, Florida in its 80+ year history. She was first elected to the El Portal Village Council Seat 2 in the 2008 election receiving more votes than any candidate in El Portal’s history in one day. She was then re-elected without opposition to the Village Council, Seat 2 in 2010 and 2012. In 2014, she defeated the incumbent Mayor Daisy Black, becoming the first Hispanic Mayor in the Village of El Portal; she was then re-elected without opposition in 2016 and 2018, serving as mayor until November 2020.

From 2012-2020, Mayor Cubillos served on the Miami-Dade County League of Cities (MDCLC) as a Board Member. Thereafter, in December of 2014, she was voted, by her peers, to serve on the MDCLC Executive Board – and then on May 4, 2019, she was sworn in as the 2019-2020 MDCLC President, making her the first Hispanic female president of the MDCLC in its 65-year history, and the first for El Portal as well.

Mayor Cubillos was the recipient of the 2016 – 2017 Miami Dade County League of Cities (MDCLC) Board Member of the Year, awarded by MDCLC President Mayor Francis Suarez. She also received the 1st Trailblazer Award during Women’s History Month in March 2017 by County Commissioner Audrey Edmonson.

Mayor Cubillos was born in New Jersey and is the youngest of nine children to Colombian immigrants. Her late father was the owner of a local flower shop and a political-news enthusiast, and her late mother was a homemaker who took care of the neighborhood children and worked alongside her husband at their flower shop. She went on to be a National Honor Society member at Coral Gables Senior High School, the Student Body President at Miami Dade College – Wolfson Campus and then on to Florida International University. She is a proud graduate of both Miami-Dade College and Florida International University.

Fluent in English, Spanish and functional in Portuguese, Mayor Cubillos started her career working alongside a Miami philanthropist and took part in the logistical planning and execution of some large community events such as: Miami Film Festival, Italian Film Festival, and Miami’s Centennial Celebration proudly earning the Miami Centennial 1896-1996 Shareholder Certificate No. 00084.

Thereafter, she served as an International Sales Education Executive specializing in duty-free trade for the Estee Lauder Companies, Inc., and after her mother succumbed to Pancreatic Cancer, she followed in her parent’s entrepreneurial footsteps who owned a small business in Coral Gables and leveraging her part-time work in college as an English tutor, founding Ms. Claudia’s Village Academy in 2007 in El Portal, FL.

Ms. Claudia’s Village Academy is an infant-VPK day school with after school programs through 5th grade, and tutoring services through 12th grade, which for over a decade has provided a solid educational foundation for our youngest citizens to succeed while creating jobs within the local community.

Mayor Cubillos is a Board Member of the Horace Mann Middle School and a member of the Phyllis Ruth Miller Elementary School Educational Excellence School Advisory Council. She also served on the Board of the Miami Shores Chamber of Commerce and is a robust advocate in raising awareness for the need for more Pancreatic Cancer research and treatment.

For over a decade, Mayor Cubillos has been the driving force behind increased civic engagement and collaboration with community partnerships in order to improve the quality of life in El Portal and for its residents. As such, in 2015 Mayor Cubillos’ initiated a Mayor’s Task Force, brought back the El Portal Women’s Club and a quarterly newsletter she originally initiated in 2011. The 2015-2016 Mayor’s Task Force is the impetus of events such as the El Portal Art Fair, Farmer’s Market, Family Food Truck Night, Eyes on the Streets, just to name a few.. In a commitment to El Portal’s late community leader Libby Bowen, Mayor Cubillos reinvigorated the re-birth of the late El Portal Women’s Club, and in 2015 selected Maribel Fruitstone to be its President. As the Founder of this 2015 organization, Mayor Cubillos has enabled and encouraged a new generation of women to be involved in the El Portal community. At the same time in 2015, she re-introduced El Portal’s quarterly community newsletter she named: Peacock Express in 2011, which features the Citizen’s Spotlight, Committee Chair reports, and Safety updates from our Police. This newsletter not only provides an opportunity for local businesses to promote themselves but it’s another opportunity to keep our residents informed. The Peacock Express has been hand-delivered to each home and business in El Portal.

As a conservationist, in the theme of “Teddy Roosevelt,” 2015 Mayor Cubillos formed El Portal’s first Tree Advisory Board in 2015, with the planting of over 50 trees throughout the community and in conjunction with initiating the annual Arbor Day Celebration, all in effort for El Portal to be designated as an official Tree City USA, and in January 2016 The Arbor Day Foundation officially named El Portal, Tree City USA! Also, in 2015, she led the charge to secure open space for the Nature Trail expansion, the installation of village-wide trash cans and doggie-do stations, and the installation of the Village Hall bike rack and a new Tot-Lot water fountain.

With Mayor Cubillos’ forward-thinking and vision, her first order of business as Mayor was to recommend the Village Council to contract an Urban Planner to help lead the way to bring the 2013 Community Charrette Design to fruition. As a result, Plusurbia Design was selected and joined El Portal in December of 2014; this led to the adoption of El Portal’s first environmentally-friendly form-base code (using the 2013 Charrette Design-Plan), that unanimously passed at the 2015 April Council Meeting. She also sponsored the adoption of the YGreen solar-friendly ordinance and started the “Think Globally/Act Locally” village-wide clean-up in honor of Earth Day in April in collaboration with Horace Mann Middle School students.

Since 2015, Mayor Cubillos traveled to Tallahassee requesting the State for funding to assist El Portal in converting to Sewer and for stormwater outfall improvements. Finally, in the 2017 legislative session, Mayor Cubillos with the lobbying team successfully secured a $550 million state appropriation to improve El Portal’s Stormwater Drainage Outfall.

Mayor Cubillos’ experience as an entrepreneurial educator and concern for the community’s youth inspired her to install one of the first “Little Libraries” in Miami-Dade County. She also hosts and sponsors the annual back-to-school backpack giveaway and presents end-of-the-year citizenship awards to Horace Mann Middle and Phyllis Ruth Miller community schools’ students, where she would like to establish Educational Compacts. In addition, she wants to establish a Youth Task Force, in theme with her widely-successful 2015 El Portal Mayor’s Task Force, to inspire citizenship and prepare the next generation of community leaders. As the Chairwoman of the Public Safety Committee, Mayor Cubillos reinvigorated the Crime Watch Program, initiated that all Police Officers be sworn-in at Council Meetings, advocated for five new state-of-the-art police cars, in the fall of 2017 secured the donation of 2 police vehicles from North Bay Village, hosted the Senior Citizens “First Response” workshop, hosted the Emergency Preparedness and Age-Friendly Community Panels at the Miami-Dade County League of Cities “Best Practices” conferences, sponsored an Emergency Humanitarian Ordinance to assist the elderly and families with special needs during the Little Farm relocation process, and directed El Portal’s response to Hurricane Irma, closely working with FEMA and FPL to ensure El Portal was one of the first municipalities in Miami-Dade County to return to normal after the devastating storm.

In 2019, she introduced the Mayor’s Top Cop “Officer of the Year’ and in the spirit of continued collaboration and shared resources, she secured the donation of police vehicles by the City of homestead Police Department, and 2 police vehicles from the City of Doral. Also, in her continued quest to keep the Villagers safe and mitigate speeding, Mayor Cubillos has requested State appropriations during this 2020 legislative session to place a traffic calming device by Horace Mann Middle School.

As Chairwoman of the Public Affairs Committee, Mayor Cubillos started the Annual El Portal Halloween Block Party, the annual Thanksgiving Turkey Giveaway, and the county-wide new Village Seal Contest. She has also hosted Farm Share, she initiated and hosted the Tri-Village’s Bike Ride, Kickball Tournament, and Social; she also ensures the village continues to host a wide variety of community events – some of which are completely sponsored. As a military wife married to Colonel Noel C. Pace, U.S. Army Reserve and Operation Iraqi Freedom veteran, Mayor Cubillos has been committed to military/veteran’s causes and charities first as a Councilperson, and now as Mayor. In 2009, she established the Village of El Portal’s first Armed Forces Day 5K Fun Run/Walk to involve the community in honoring the military, and which has continued every year since.

In the fall of 2018, Mayor Cubillos introduced Florida Government Week where she hosts a new resident town hall, conducts an 8th-grade Essay contest at Horace Mann Middle School: “If I Were Mayor” and initiated ‘El Portal’s Citizen of the Year’ with a proclamation.

In 2019, she spearheaded the El Portal Bahamas Relief after Hurricane Dorian devastated the Island. During that time she also hosted a cultural breakfast for over 700 students and staff at Horace Mann Middle School in honor of Hispanic Heritage Month.

Mayor Cubillos’ priorities included a roadmap to resiliency and innovation for El Portal; in other words a three to five to ten-year plan. This will include following through with the Septic-to-Sewer Phase 1 and a village-wide cost analysis breakdown for the conversion of septic to sewer and implementing a Little River Regional Compact initiative – to help achieve this and in her spirit of collaboration and shared resources, she initiated and sponsored Resolution 2020-15 to establish El Portal’s first resident-based Resiliency and Sustainability Task Force Committee in May 2020 and Resolution 2020-38 adopting El Portal’s first Architectural Guidelines book and Ordinances that will further update El Portal’s Comprehensive Plan, protecting our Village’s future!

She has been maximizing the benefit of Bright Line Railway for our residents, as such, she supports the Northeast Corridor Coalition and represents our Village, alongside more than 40 prominent business, education and organizations, who are advocating for a major expansion of the commuter rail service with five new stops in Miami-Dade County between downtown and hopefully one (as we have proposed at the little farm) will become a reality in El Portal. She has diligently worked to ensure proper management and smart development of the Sanctuary, the annexed area, and the Little Farm, as well as, better branding/identification of the Village of El Portal through improved signage. As a result, the Village’s annexed area celebrated Skatebird Miami groundbreaking on October 1, 2020 and is scheduled to open in spring 2021, as well as the Kavista Apartments was approved by Mayor and Village Council in May 2020 and development commences in 2021.

Mayor Cubillos and her husband, Colonel Noel C. Pace, Esq. have lived in El Portal for over 13 years, with Nemo, Nero, and Nina – their 3 rescue dogs! They are both Certified Open Water Divers, Miami Half Marathon runners, enjoy traveling and volunteer with a wide variety of organizations that benefit: veterans, seniors and the Youth. Mayor Cubillos’ passion and concern about the well-being of the residents of El Portal and the greater Miami-Date community, is evidenced through her community initiatives, her work in education, her support for the veterans, youth and senior community, the creation of local jobs, and her commitment to help citizens create opportunities for tomorrow — today!

Her vision of “working together to make El Portal a beautiful place to live where everyone matters” can now be seen throughout the village and at numerous community events, and where property values in El Portal have led Miami-Dade County in increasing by double-digits each year, for three straight years 2015-2018.