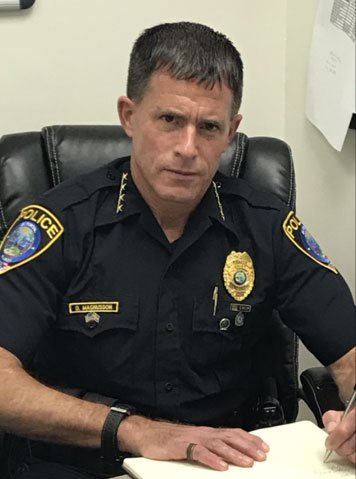 Good day to you all. I’d like to welcome all of you to a new feature I am calling “Chief’s Corner.” Being a retired amateur boxer, I sort of like the sound of it. What I will try to do in each edition of “Chief’s Corner” is to bring things to your attention, explain issues, and/or give some resolution to concerns you may be having. Undoubtedly, it will be a work in progress with tweaking. I will throw out that does not work and keep (and enhance) the parts that are of value.

I started on 6 May 2019. Since then, I have worked towards getting some administrative issues back on track. As you will see now, on the website, is 2018’s final crime statistics. They had not been updated since October. In closing out 2018, I moved toward getting the statistics accumulated and disseminated for 2019 through May.

Staying atop of the crime statistics will allow me to focus on analytical work (such as trends and patterns) so that anything that begins to look concerning can be addressed in its infancy and hopefully, nipped in the bud.

That being said, it is also my goal to respond quickly to all matters that come through the Village of El Portal Police Department. I understand that not everything can be resolved to everyone’s liking, but I also understand (and demand) that everyone is responded to in a timely manner.

If you were to take a look at 2019’s Monthly report (through May), you will find a new area that will highlight park and walk hours monthly. It began in mid-May. I have always been a proponent that you see more at “3 mph than you do at 30.” Officers and me (I like a good walk) will get out of our cars from time to time at all hours of the day and night (though probably not during a torrential rainstorm) and walk the block.

You will see us walk a block and circle it rather than start off at Point “A” and keep walking a straight line down many blocks, just in the event that an emergency call requires us to get back to our cars. We do not want to be a half a mile from the car when that call comes in.

That being said, I want to remind everyone that you should call 911 when you have a police-related issue. I have been told by citizens that they saw some suspicious activity. They went on to say they called the station but got no answer. My officers most of the time are out on the street. That is where I want them; not in the office. Thus, there is a good chance the call would be missed. You should call 9-11. The call is entered into the system and the call is dispatched immediately 9 or according to priority if other higher priority calls are holding.

Do not report crimes over social media UNTIL you have called 911! The question may exist, what constitutes an emergency? Some may argue, someone walking around the neighborhood at 0200 hours does not make it an emergency. I would argue, that in the pure sense of the word “emergency” you may be correct; however, someone walking around a neighborhood at 0200 is probably a burglary or stolen car waiting to happen. If a rapid police response is needed (and in this instance, I would surely say “YES!”) then 9-11 need be called.

The Village of El Portal Police Department is dispatched by the Miami-Dade Police Department. They have a non-emergency line that you should call if it is not an emergency (e.g. the proverbial cat stuck up a tree or garbage can stolen).